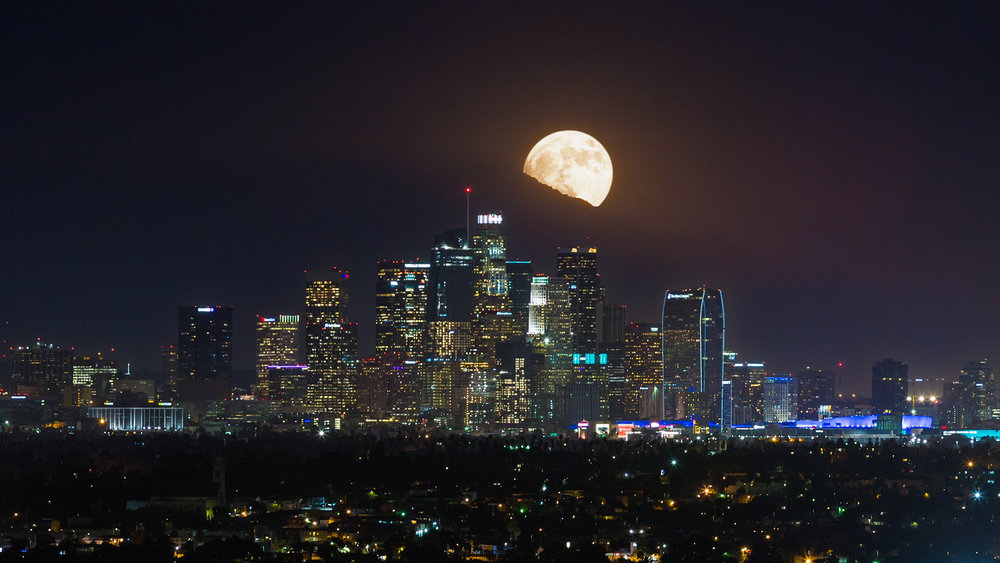 "Passionate and fiery, Los Angeles burns with an excitement found in no other city. It has become the center of fashion, art — and the Anarch Movement. Fifty years ago, the streets ran red with Elder blood, and the anarchs claimed the city for themselves. They stood poised to make it a land unparalleled in Kindred history.

Now it is unparalleled in violence. The anarchs who swore eternal brotherhood when they drove out the Camarilla have formed gangs and now battle each other nightly for control of the city's neighborhoods. The leaders of the Revolt can only shake their heads in sadness, for their speeches fall on deaf ears. On all sides enemies gather, drooling at the opportunity Los Angeles presents."-From the White Wolf Catalogue.


LA By Night is designed to be a haven for grounded, modern-supernatural role-play set within the World Of Darkness. This is not a functional Chronicle, per se, not in the manner of weekly ongoing games; rather, it is a place for people to set their urbanite characters in. There are no agendas or quests. My goal is to weed out powergamers and the rut of overtly low generation kindred that seem to be everywhere. Think of this as a low to moderately powered campaign that allows for actual challenge and conflict. And I don't mean to outwardly criticize people who like their 4th generation, four thousand year old Methuselahs. That just isn't how I write nor want to do my stories.

Also, I want a place devoid of OOC drama, bullying, and ego. Some of us just want to write. If that sounds like your bag, come join the night crew in LA.

2) Don't be a dick. Bullying, peer pressure, and groupthink insults will be punished with a heavy hand. Respect the other players. If disagreements happen, keep them civil and let a moderator do just that: moderate.

3) The room is default in character. That means you speak in out of character paranthetical bubbles, or any marked denotions that you like, when you aren't representing your character. If you start spamming the room with OOC jargon or generally start unnecessary room chatter or conflict, you'll be warned, then kicked out.

4) The setting uses 20th Anniversary Edition as a baseline, so when in doubt, whip that sucker out. We aren't rules lawyers, though, and this setting is played fast and loose. If you see a mistake, PM a moderator and have a conversation, but let play run smoothly. Mistakes can always be kept in mind for a later date.

5) A bit on writing. We're not counting words around here. You write until you're finished, but before you send that post, take a second to read over what you've typed out. Quality matters over quantity. A well constructed, single paragraph is preferable over five, redundant, thesaurus ridden messes.

6) A note on the setting location. Obviously, we're talking about Los Angeles and its environs, but more specifically, play time tends to be set after dark. Kindred run around here and need to be active, but that doesn't necessarily rule out scenes set during the day, so long as you can make it work and they don't confuse ongoing scenes.

What follows is verbatim from the Los Angeles By Night supplement, printed in 1994, with a little updated information correspending to current events.

The City of Los Angeles itself is divided into several areas, as far as the vampires are concerned. There is south central Los Angeles, which is controlled by Mohammed al-Muthlim and his Crypt’s Sons, while El Hermandad controls East L. A. Louis Fortier oversees West Los Angeles from his estate in Beverly Hills. Very few vampires live in the eastern San Fernando Valley, but many travel there at night to feed.

But Downtown, Hollywood, and the Hollywood Hills are what most Kindred think of when they think of Los Angeles. With almost 60 vampires living in 55 square miles, this area has one of the greatest concentrations in the United States.

This barony is different from most. Under the agreements signed by the gang lords in 1956, no single gang rules this area. While vampires may form into coteries for companionship and self-protection, Jeremy Jenna  sees to it that no one group becomes powerful enough to lay claim to any part of this area. He has made the whole barony open hunting ground for any Kindred who want to feed here, as long as they are careful and clean up after themselves.

Since Jeremy and his coterie have sworn to defend this area, the residents don’t have to concern themselves as much with protecting their turf. As a result, the vampires who live in the “Barony of the Angels,” as they jokingly refer to it, tend to be those who find gang life unattractive or who are too weak to qualify for, or survive long in, a gang. The intellectuals, fashion plates, and politicos are to be found here, as well as the rejects and the crazies. (Editor's note: Jeremy MacNeil has since seen his Final Death and Jenna Cross, the thin-blood, now claims domain over this section of LA. She continues to uphold the gang treaty signed in 1956, as well as many of his old policies, so where appropriate, sub her name for his.)

The other type of Kindred found here is the newcomer. A Taste Of LA, the one landmark in Los Angeles known to Kindred the world over, sits on the eastern edge of the barony. Anarchs new to L.A. head there as soon as they hit town, knowing that they will get a friendly welcome and a chance to orient themselves.

The most important Kindred in the barony live in the Hollywood Hills, overlooking either the chaotic streets of Hollywood or the quiet, orderly streets of the San Fernando Valley on the other side. Full of small pockets of humanity, the Hills make a perfect haven for Kindred.

Most kine here would not find it odd that their neighbors only go out at night; they are themselves engaged in activities far stranger than a little bloodsucking. Toreador elders hunted here before the Revolt, and some of their huge, gloomy mansions still stand. In fact, some of the Toreador still exist, hiding out in the deep recesses of the Hills.

On the flats below the Hills lies Hollywood, where the bulk of the L.A. vampires make their havens. Harvey Wilcox, a prohibitionist from Kansas who came to L.A. in 1883 and started buying land in the Cahuenga Valley, actually developed Hollywood as a religious community. Mrs. Wilcox christened the place in 1887 after hearing the name from a woman on the East Coast. At night, Hollywood presents a picture that would totally bewilder the Wilcoxes, and the Gabrielino Indians who used to wander through these same flatlands.

East-west streets such as Hollywood Boulevard, the Sunset Strip, Santa Monica Boulevard, and Melrose Avenue slash through the darkness. Their garishly-lit sidewalks are crowded with punks, junkies, dealers, muggers, pimps, and hookers, as well as tourists and honest citizens out for a night on the town. Along the boulevards lie restaurants, nightclubs, tourist traps, leather stores, and endless rows of boutiques. Between the streets lie huge pools of darkness, where the muggers prey, the deals go down, and the Kindred feed.

One of the most famous sites in Hollywood is The Barn, where The Squaw Man, one of the first films made in Hollywood, was filmed in 1913. Probably the most visible landmark is the Hollywood sign (which originally read “HOLLYWOODLAND, the name of a development being built below the sign) with 50-foot-high letters set on the side of Mt. Lee.