There's a densely-packed street in your city that seems to attract more troublemakers than it does trouble. A street were all the shops and houses look like they were crammed in, instead of built up, because there was nowhere else to store them. A street that rarely sees peacekeepers, but keeps the peace all the same. Usually.

Some say it's a dimensional rift, separated from space and time. Some say it's a nexus for magical forces to converge. Some say it's a piece of the afterlife, broken off and allowed to wander. But everybody there seems to be in agreement on one thing: no matter your plane, dimension, time, or space, everybody needs somewhere to kick back and take it easy.

Welcome to Easy Street! This is an all-purpose room for character-driven roleplay in a relaxed setting. Characters from just about any world can fit in; fantasy, modern, sci-fi, canon, non-canon, what have you. All that's needed is a profile and a willingness to write with others.

A lot of details about the setting are left intentionally vague to encourage improvisational RP without the need for a DM. Introduce your character however you would in any general-use bar or inn-themed room, except it's a street. Hint: if you yell, somebody will be within earshot.

If you're new to the room, or new to RP in general, feel free to say hi and ask questions about anything, and we'll try our best to answer them. 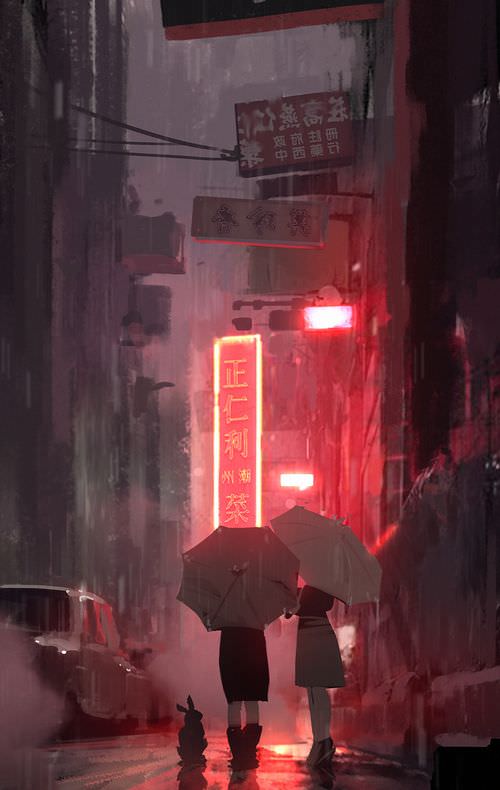 Note: these are only 'known locations' within Easy Street because they are accessed frequently and are usually in the same place every time. It is not a comprehensive list of every place.

Sneaky Pete's Easy Eats — A diner with a name that suggests it was established by one 'Sneaky Pete,' whom nobody has ever seen. The pay is good, though.

Tumble-Turn Laundromat — A hand-me-down laundromat where only a few of the lights flicker. A place to meet other denizens of the street at all times of the day or night. Everybody has laundry, after all.

Metro Station 14 — Easy Street's singular, abandoned underground train station. Unlit, uncleaned, and covered in graffiti from the mouth of its entrance downwards. Do not attempt to explore the tunnels, and do not, under any circumstances, get on any trains that stop there. 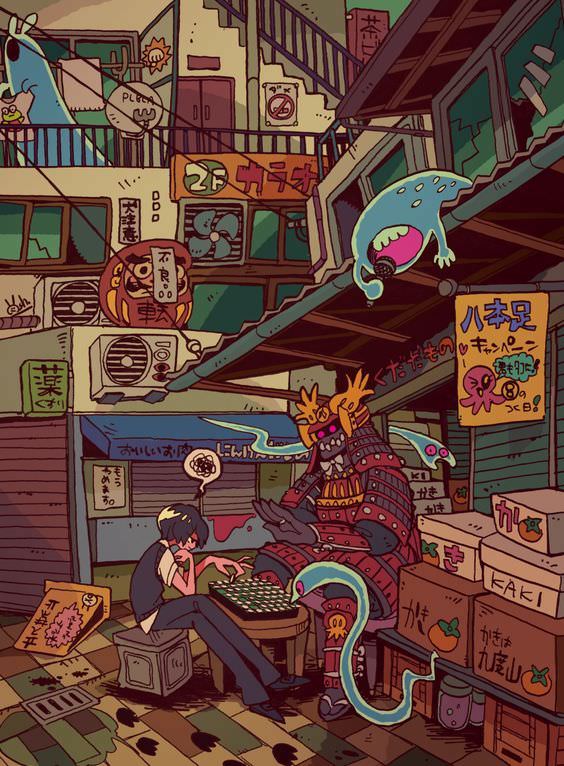 Basketball Court — Craters in the concrete and one obliterated hoop suggest that the competitions that take place here have little to do with basketball. A good place to settle scores; just try not to damage the adjacent buildings.

Motel 3 — It's actually a Motel 8 with its sign chopped in half. A bed and a bath for those just passing through.

Back Alleys — Where the spaces between buildings are too narrow for cars, and get narrower toward the tops. A favorite of vagrants, up-to-no-gooders, and those who enjoy getting lost.

Dog Shrine — People have come from miles away to visit the Dog Shrine and worship its singular, ordinary dog. 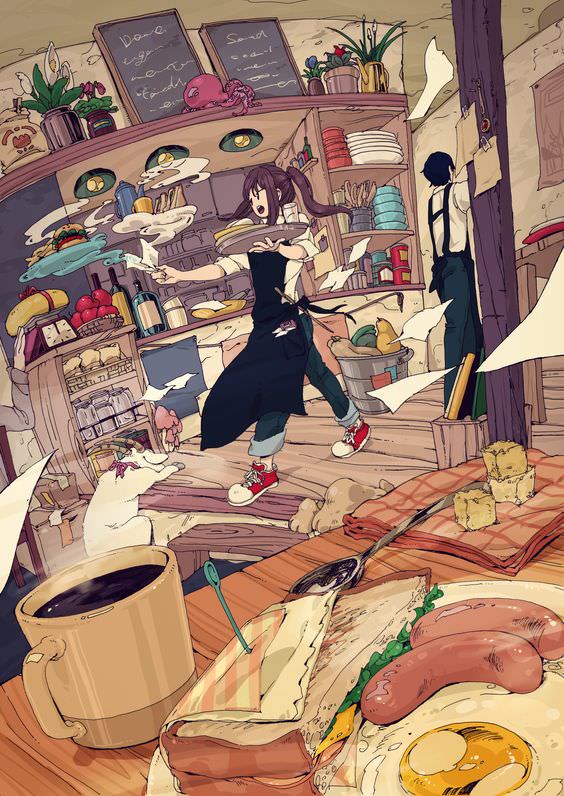 1. Be excellent to each other! Above all else, we are here to write together, so strive to cooperate with your fellow writers. Issues between writers should be addressed maturely in PMs, rather than in the room. If the issue cannot be resolved, contact one of the room's moderators. Provide screenshots of incidents.

2. Be respectful. Sensitive topics (politics, religion, identity) are allowed as long as the tone remains respectful and mature. Constructive conversation is encouraged; toxicity, rudeness, or inciting drama are not. OOC Racism, Sexism, and bigotry of all sorts are not tolerated. Moderators reserve the right to end any discussion in the room, or ask that it be moved to PMs. 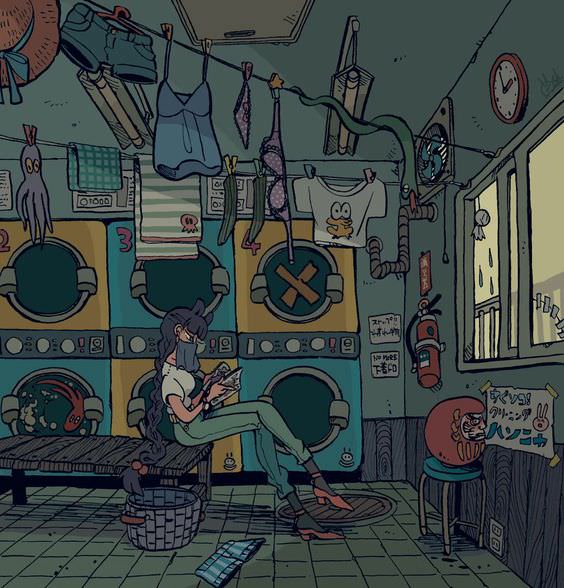 3. OOC chat and shitposting is A-OK, but keep it to a low murmur, or move to PMs, when there's long-form RP going on.

4. This is not a smut/NSFW RP room. Profiles that moderators deem to be overtly sexual (Immediate nudity upon opening the profile, clearly made for smut, etc.) may be asked to leave, or kicked. Overtly sexual profiles for underage characters are not allowed.

5. Keep IC and OOC separate. OOC discussion of plot and characters is highly encouraged, but bringing OOC drama into your character interaction is never allowed.

6. No godmodding at any point. Meta-gaming and forcing actions on other characters is never allowed, whether in a fight or not. Moderators have a final say in any dispute about what happens during a character fight.

7. Character death cannot happen without the writer's permission, and should always be discussed ahead of time.

When a writer breaks one of these rules, they receive one warning. Their next infraction will be a ban. 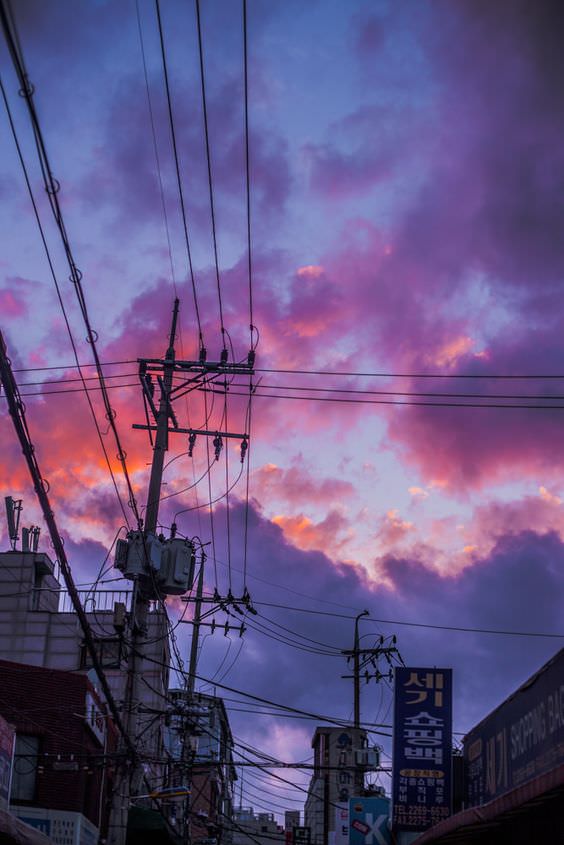