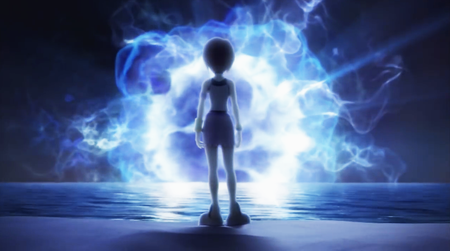 In a multiverse where one can travel through darkness and light, lose oneself and gain oneself back, and have one’s identity copied and recopied, the walls between parallel realities have always been thin. But now, they are also fragile. Where once the occasional blip in one universe could turn a corridor of darkness into a tunnel to another universe, now reality is bleeding into itself on an unprecedented scale. Unwilling tourists don’t even have to leave their bedrooms to find themselves in another universe entirely, transported instantly, whether it’s to the same location in space or off by miles or entire worlds. Just as with the worlds once consumed by the Heartless, some universes have already disappeared.

While the exact root of the problem is unclear, red-eyed and unusually aggressive Heartless and even Nobodies are showing up in those universes that have not already fallen. Time is running out for each of them, and as always there is the danger that Xehanort already knows about all this.

Perhaps he has always known. Perhaps this was the plan, all along.

In this room, you are allowed to play out your own interpretation of canon and your own alternate universe versions, but you are not allowed to tell other people how to play, nor try to make them play a certain way by pulling things out of your ass.

This plot is still unfolding, so villains can claim credit for the chaos, but only with permission and as a lie to confuse the situation; the actual perpetrator will only come forward at the discretion of the staff. The plot is also double-heavy, so doubles are not just allowed, they’re encouraged! Doubles do not have to like each other or the idea of doubles, but if a player hates the idea of doubles, they should keep it out of character (and maybe not involve themselves in a plot like this).

The differences between alternate universes can be unremarkable, so multiple canon verses are permitted. Players can enter the room in any setting, and different sets of characters can play in entirely different parallel universes at the same time, even in identical locations. If someone leaves the RP suddenly without a plausible reason for their character to leave, it can be explained by characters getting whisked away back to their original universe or off to a different one. So if you want to play in a parallel universe without interacting with the characters in the room, it's best to mention this OOC; just keep in mind that if you decide to put your character far away from everyone else and make no effort to play with anyone, no one has to bend over backwards to include you.

However, the AUs aren’t an excuse to bend the rules. If a Sora wants to be in a relationship with his universe’s Kairi, this is fine. But if a Kairi from a different universe doesn’t want to make that relationship her canon, he can’t insist or suddenly start complaining that his own Kairi was awful to him. That’s obvious metagaming and will earn a warning. Some things can’t be changed; for example, Xehanort will never be treated as a hero. If it seems like a player is writing an AU that only seems to benefit their own character, this will be addressed. The AUs are for expanding play, not for using them against other players.

1. The room name is to reflect our overall Kingdom Hearts theme, but while we do not allow smut-based (including excessively sexual) profiles, we are not KH-exclusive. Anyone is welcome to play in the room, but we do ask that only characters who appear in or are alluded to in the Kingdom Hearts franchise join the group page.

2. There is to be ABSOLUTELY NO meta-gaming, power-playing, god-modding, or otherwise manipulating another player's character or their character's backstory without prior consent.

This means you may not make your character invincible; however it also means you may not, for example, decide Braig broke his arm in the fifth grade if you play Lexaeus, and you may not contradict a player on something their character has previously done. If we see this happening in the chat, we will very swiftly step in and put a stop to it.

3. Shipping is A-Okay, but please keep actual/explicit smut confined to PMs. Presexual actions (i.e. kissing, petting, and things of that nature) are permitted in the room, except in the case of contact between an adult and a minor. Sexual themes between adult and minor characters ABSOLUTELY WILL NOT be tolerated under any circumstances.

4. Sexual harrassment ABSOLUTELY WILL NOT be tolerated. If someone tells you they are uncomfortable with your advances or asks you to stop something and you refuse to do so, you will be kicked. Repeat offenders will be permanently banned.

On this note, implications of sexual assault are not welcome, neither IC nor OOC. Do not even make jokes of this nature or you will be warned, and if you continue, you will be banned.

5. Adult language is perfectly acceptable, however slurs or any OOC behavior that smacks of "isms" is not. That is to say, racism, sexism, ableism, homophobia, and transphobia will not be tolerated OOC. It's a grey area IC depending on the character, but if anyone asks you to stop, you must do so regardless. This is a safe space and we would like to keep it that way.

6. Please be considerate of people roleplaying in the chat room. Roleplay is what the room is for; please keep all OOC chat confined to brackets, parenthesis, or some other obvious marker at all times. Along the same lines, crack is all well and good, but don't be surprised if serious roleplayers ask you to cut out the fandom bullshit.

7. In the same vein, please keep OOC and IC separate. Conflicts IC are to be expected, as it is the nature of RP, but if a character does not like yours, it does not mean the player dislikes you. Please do not regard IC actions as necessarily reflective of the opinion of the player.

8. Doubles are okay and to be expected, HOWEVER please do not expect all characters to, in character, be accepting of the existence of doubles. If Riku, for example, is hostile towards a double in-character, that is to be expected based on his canon interactions with Riku Replica, and is not a violation. OOC harrassment of doubles, however, is a violation and will not be tolerated.

Note: If you feel someone in the chat or otherwise is violating any of the rules, please address it promptly OOC rather than attempting to punish them IC for the infraction. If you are uncomfortable confronting the offender yourself, or if a mature and reasonable attempt to address the conflict fails, please PM a mod with a record of the incident and it will be addressed as swiftly and fairly as possible.

The rules dictated above may change slightly to reflect situations we did not account for when we first wrote them.