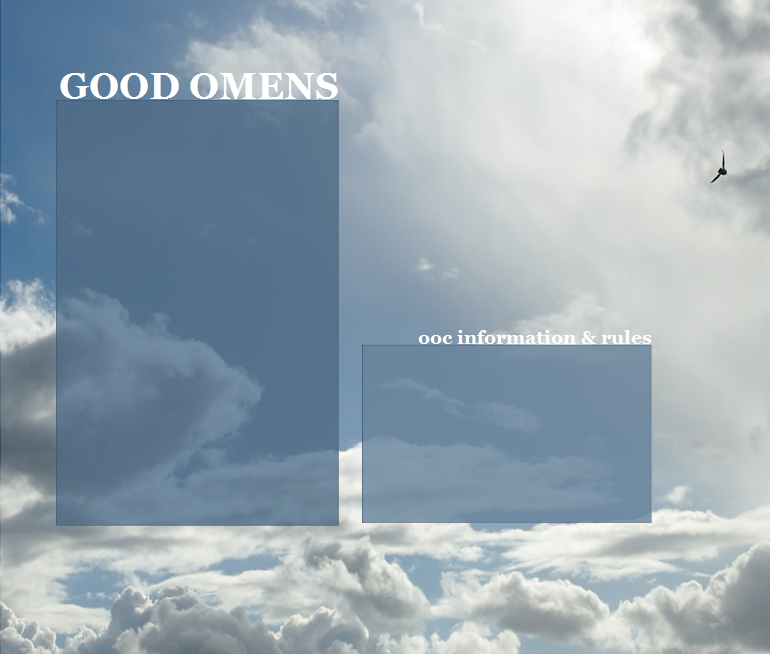 Please refer to the list of 'dramatis personae' or look at the list of members below, both of which indicate which characters are taken.

Doubles are not accepted at this point, nor are OCs, unless approved by a mod.

Para and script-type roleplay are equally accepted, though it is asked that smut is taken to PM.

Keep OOC to a minimum, or take it to PM. Assume, otherwise, that everything said in the group is IC, unless indicated.

If you are seen to be roleplaying your character badly or terribly out-of-character, there is a possibility of that character being revoked.

"The world will end on Saturday.  Next Saturday.  Just before dinner, according to The Nice and Accurate Prophecies of Agnes Nutter, Witch, the world’s only completely accurate book of prophecies written in 1655.  The armies of Good and Evil are amassing and everything appears to be going according to Divine Plan.  Except that a somewhat fussy angel and a fast-living demon are not actually looking forward to the coming Rapture.  And someone seems to have misplaced the Antichrist."

Full Chorus of Tibetans, Aliens, Americans, Atlanteans and other rare and strange Creatures of the Last Days.